But did you know that you can help the Power BI team make the release notes better?

Take a look at the release notes. 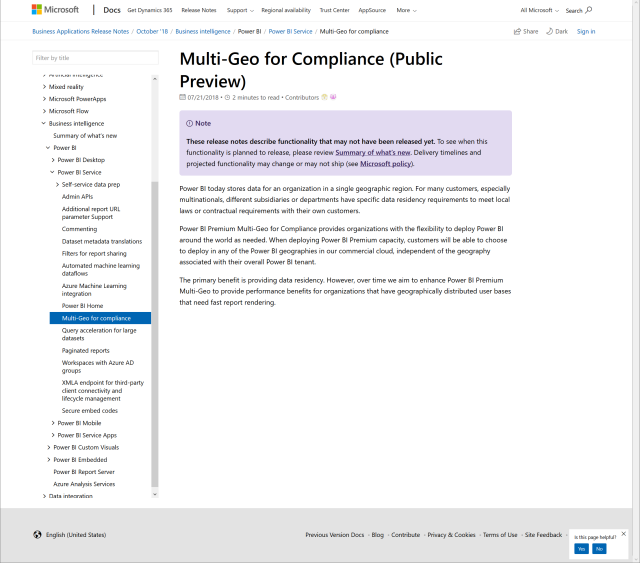 Look more closely. Look down… all the way down. Look here:

At the bottom of every page in the Power BI release notes[1] you can find a widget to provide feedback on whether or not the page is helpful. If you click “no” you’ll be prompted to share your ideas on how the page could be improved:

This could mean one of two things:

Based on the number of questions I hear each week about the Power BI roadmap, I’m tempted to suggest that option #2 is more likely. Fortunately, I’m here to let you know that this is not the case.

Every time you provide feedback on a page in the Power BI documentation – whether it is simply clicking “yes” or “no,” or if you take the time to provide more in-depth feedback, someone from the Power BI team reads it, and uses that feedback to improve the documentation.

If you’re looking for more information about what’s coming in Power BI, this is the best way to let the Power BI team know. For example, if a page in the release notes says something general about an upcoming feature, and you’re trying to understand if this includes something specific[3],  ask for this to be included in the page.

Please understand that if you’re asking general questions about upcoming capabilities that are not covered in the release notes, it generally means that the Power BI team isn’t ready to talk about it yet[4]. But if there is a topic already included in the release notes or other documentation and you would like it expanded or clarified, please do share your feedback. People are listening[5] – let them listen to you too.

[1] And every page in Microsoft’s online documentation, for that matter. Not just Power BI, and not just the release notes.

[3] Most of the questions I hear each week fall into this category.

[4] This is the reality of building software. The further out a feature is, the less certainty there can be about its details and timing. As a general rule, it’s better to say “we don’t know” or to not say anything than it is to say something with low confidences and then to not deliver as expected. We all know this, right?

[5] This blog post was inspired by a conversation I had last week. I was trying to figure out what I could do to help make the release notes better, because I was seeing a trend in questions that fall into the general scope of the release notes, but which could not be directly answered by the existing release notes content. Hearing that there was already a process in place to collect and act on feedback was a surprise to me, and the conversations I’ve had since then suggest that it may be a surprise to you as well. It could be that everyone but me already knew this, but I wanted to share this, just in case…